Virtualizing Domino is NOT a "Get Out Of Jail Free" card

Further to yesterday's blog we wanted to point out that recently VMware updated their latest documentation for VSphere 6.5, included is the recommendation to "Defragment the file system on all guests" to enhance Disk I/O performance.

It is so often not understood that fragmentation in the virtualized environment can have a devastating impact on Domino server performance and also the O/S, and yep, we see this a LOT. This negative impact happens because as far as the Guest  O/S (Windows) is concerned it is still working with fragmented files and that causes Windows to issue many more I/O requests to access these files. This creates Split I/O's where unnecessary multiple I/O requests are generated to access fragments of each file and that contributes to I/O bottlenecks with some requests being blocked while other are fulfilled. Basically the end result is Windows still perceives the fragmentation at the file system level and must deal with it the same as if you were running the O/S and Domino server on a physical box. 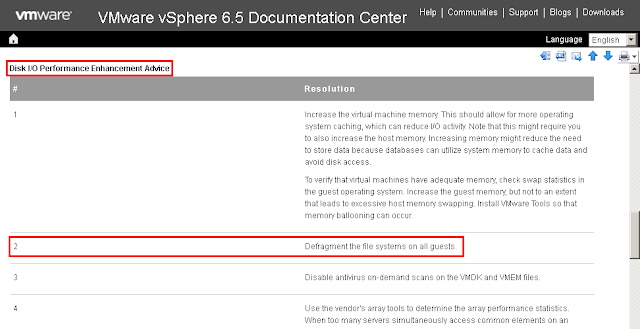 Fragmentation happens on File System level, regardless of virtualization or storage medium, there's always some impact, and it won't go away simply because you are running Domino virtualized.

Running Domino virtualized or with SAN storage is not a Get Out Of Jail Free card with regard to fragmentation and it's effects, getting the best from your system investment involves optimizing all the components in the "system" and that includes the Guest OS and the Domino server.
Posted by Adam Osborne at 6:49 AM