A simple way to reduce backup times by 55%

Last week DDO went into action at an Australian Coal mining organisation. The server was a mess, with exceptionally long backup times. It is a VM, running on a high powered SAN, but none of that matters, because if Windows sees fragmentation it acts accordingly, it slows down and in this case was issuing millions of additional I/Os to get backups done.

DDO ran and optimised the files.

In the chart below you can see the positive effect of removing 742,289 fragments from just 144 databases. Backup times plummeted from 6 hours, 40 min to just over 3 hours. A fantastic result. 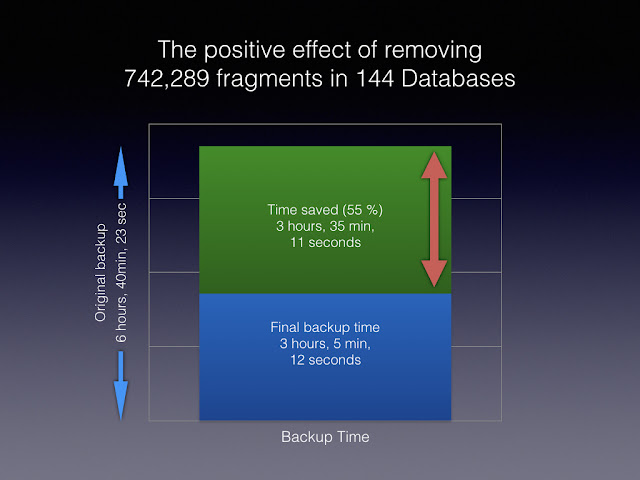 The backups are now faster and the SAN less stressed with everything connected to it more performant.

Find out more about the Domino Database Optimizer.


Update: The server is running 9.01 FP6 and in such a mess that even when DBMT ran, the resultant database became MORE fragmented. More on this later.
Posted by Adam Osborne at 8:26 PM

why backups ? does the san not support snapshots ?

I'm not sure. I guess snapshots aren't backups, and SANs are known to die, drown and get burnt.