Recently we were contacted by a customer who had been using Defrag.NSF on their servers but had stopped some time ago and realised things were starting to go downhill.

This ended up being a great test case/exercise and we managed to get some very telling screenshots off the server, clearly showing the deterioration and subsequent improvement once we got things back on track.

It turned out about a year had passed since the last Health Check had been run and things had definitely gotten worse, from "Excellent" in 2013 to "Poor" now. 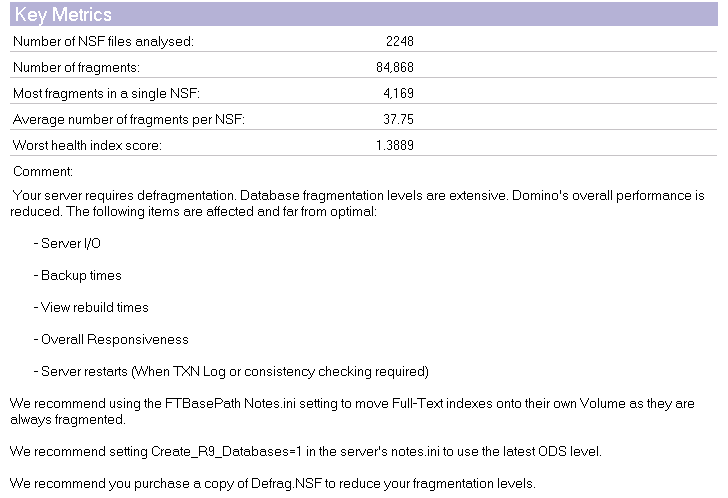 Once Defrag.NSF had been re-enabled on the server and allowed to go about it's scheduled business we ran a new Health Report and were rewarded with the following improvements (see below). Comparing this report with the previous report showed a dramatic improvement. This type of improvement, as noted in the report, has an immediate effect on Server I/O, Backup Times, View Rebuild times, Overall Responsiveness and Server restart times where TXN Log or consistency checking comes into play.

While looking over the server, we also noticed this little gem, a 60+ Gig database!

Looking in Defrag.NSF's integrated log we see this database was in almost 1000 fragments prior to Defrag.NSF processing it at 3:12 AM, only 20 minutes later it was in one piece, this was a great result and further testament to our "purpose built for Domino" dual defrag engines, considering this database is very close to the recommended upper size limit. Good luck trying that with a "freebie", generic in a wrapper, defragger!

"Built For Domino" - Just one of the many reasons you should be using Defrag.NSF on your servers to save time and money!
Posted by Adam Osborne at 5:00 PM

You let them get away with a) either an outdated ODS or b) an unsupported server?

The ODS shows 41 - the latest supported server is R8.0 that at least can support ODS 48. The current does ODS 52. Compression does wonders!

This particular customer isn't doing a lot of things we recommend and the use of the latest ODS is one of them.

Notice that in the Health Check reports Defrag.NSF has detected it's running on a R9 server and recommended the Create_R9_Databases=1 Notes.ini setting.

The customer was not (but now is) using Defrag.NSFs integrated DBMT scheduler, that will help move them up to the latest ODS.

Finally they just received the latest version of Defrag.NSF that can automatically enable DAOS, document compression and LZ1 compression on databases. Offering massive time and storage savings all round.

All this with via a couple of tick boxes and clicking OK.

Defrag.NSF more than just a defragger !!