DBMT has a nasty little side-effect

A lot of been written about the benefits of DBMT - some have even said that it alone is a reason to upgrade to Domino 9. Everybody agrees that it is a nice addition to Domino.

It does however have a nasty little side-effect that comes from running the tool, and that is file fragmentation. In fact the DBMT has the ability to fragment  NSF files very very quickly and severely.

To check the effects we took a small test server we have and plotted fragmentation between invocations of the DBMT. Here are the results: 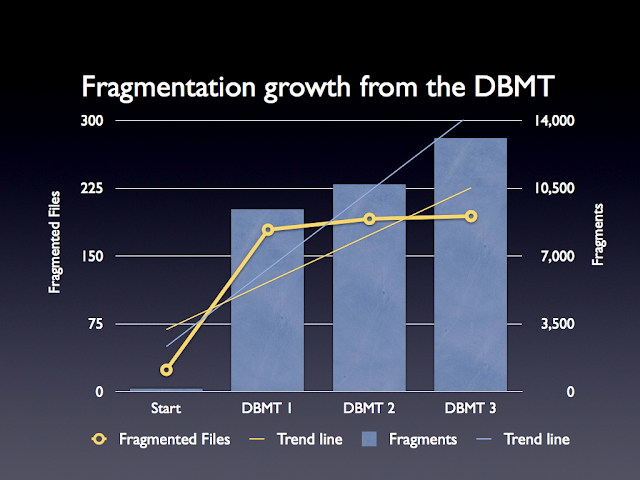 As you can see things get out of hand very quickly, and as we've blogged before this WILL have a performance impact on overall server operations, Domino's I/O and also a negative impact on backups. This is a problem that compounds, it's like gradually putting on weight, the insidious effects might not be immediately apparent but over time your servers and SANS will become sluggish.

We've always said running Defrag.NSF on a server is a good idea, and now with the DBMT it is pretty much a must have if you wish to keep your server in good shape and your backups as efficient as possible. Defrag.NSF WILL prevent server and backup performance from slowly degrading due to the insidious effects of fragmentation and if you use the DBMT you WILL exponentially introduce extensive fragmentation across your nsf files.

So use the DBMT and Defrag.NSF as the perfect partners in your scheduled server maintenance.

More information on Defrag.NSF can be found at Preemptive's web site.
Posted by Adam Osborne at 2:13 PM

Thanks for pointing out the fragmentation issue with DBMT. This has been addressed in Release 9.0.1 with a change to DBMT to preformat .TMP files during when DBMT compacts

Hi John, that's a nice new feature but only works well when there is contiguous freespace available and that's only going to happen if you got something like Defrag.NSF working away in the background.

In fact without it anyone who's been using DBMT prior to 9.01 or every used compact -c or has Full text indexing has probably got such a big mess on their hands that the pre-alloc is just going create an equally bad fragmented file.

DBMT is a great new feature, and this makes it even better and works really well when combined with Defrag.NSF.

What can you do if you are running on IBM i? Defrag.NSF does not run on it.

It would be possible to do a version of DDO for IBM i, but I'm not sure if we'd ever recover the development costs.