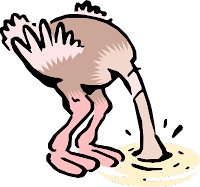 If something IS broken then it really does need to be fixed, especially when the affected items are at the very core of everything else that needs to be done, like I/O on Domino. Sometimes the tricky part is recognising when something is broken and can be improved significantly and this can be a real problem with Domino because it's so resilient it can be very broken and keep plugging along although at a much reduced potential.

The good news is we have released a new FREE Defrag Health Check tool to help identify how "broken" your NSF files are and it reports this in an easy to read graphical format. In a single run it will analyse all the NSF files and drives attached to Domino and report on their current state. Other aspects of Domino with a proven negative effect on fragmentation and hence a flow-on negative effect to overall performance and cost of ownership will also be analysed. Depending on the overall findings in the analysis, remedial and also preventative advice is displayed along with a list of typically affected areas of server performance.

To illustrate how the tool would report two opposing scenarios on the same server (one good and one not so good) we ran DBMT, this also shows the insidious effect it will have on a server's fragmentation after just one run, we ran the Defrag analysis tool first on the server while it was in good shape and then again after DBMT had run just once. The resulting reports clearly show a turn for the worse after DBMT ran just one time, but again the good news is that DBMT is a great tool and the DBMT integration in Defrag.NSF allows this fragmentation to be taken care of and optimised again automatically, you just tick a box in Defrag.NSF.

The point is you now know what you didn't know before running the Defrag Health Check tool.

A report from the FREE Defrag Health Check tool before DBMT runs: 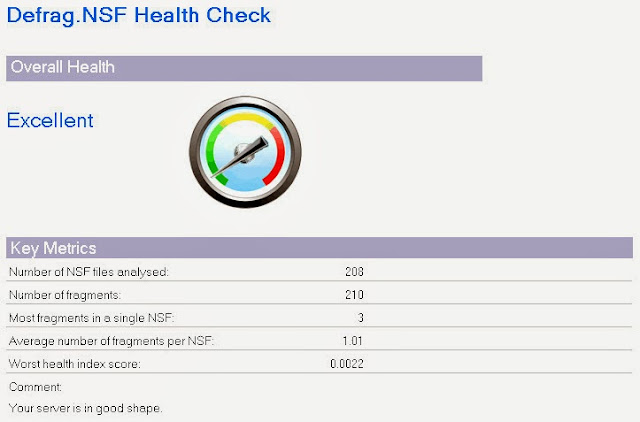 A report on the same server after DBMT runs just once: 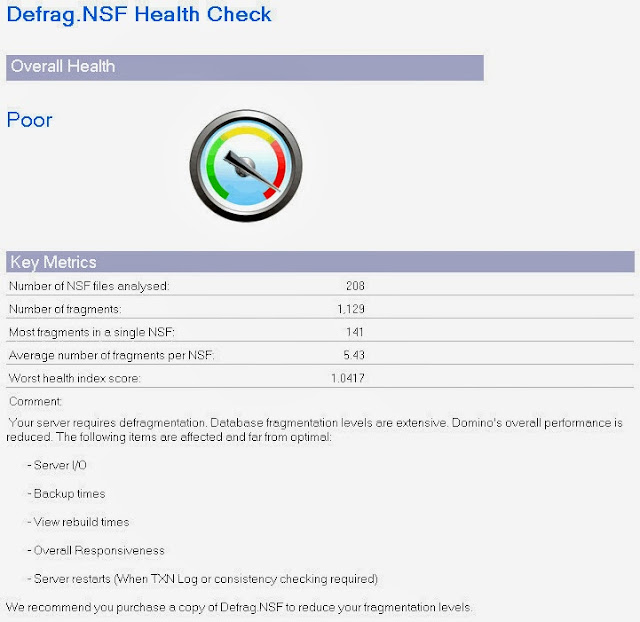 Get the tool today and find out what you don't know.
Posted by Adam Osborne at 9:10 AM